It was a cold and frosty pitch at Abraham Derby School in Madeley .

First of all, we warmed up. A lot of us were feeling very nervous as it was a first game of the Telford School’s Finals.

Our first game was against Captain Webb from Telford. The whistle went and off we went!  Newport took the kick off. Holly, team captain, passed it to Fergus who ran down the pitch knocking it around everyone and made it to the try line and scored a quick try. He did that many times. Eventually, the match ended, and Newport Junior School won 7 – 4. Hooray!

Next, we faced a tough game against Shortwood Primary School. They had beaten us twice and we have won twice previously in past competitions. They are a very good team. It was an incredibly close game. We were losing.  4 – 2 until the final two minutes where we scored two quick tries. One of which, was an incredible sprint finish from Kieran. Holly spun it over to Liam and we won 5-4 due to a last-minute try.

Our third game was against a team called Meadows. A great try from Holly and we won with a great amount of joy. The end score was 8-4 to Newport.

Our last game was a very exciting game against Ladygrove. This was because it was essential to get through to the semi-finals. So, the match started with a Newport ball. Skye started. She passed it to Jackson, who was eager to score some more tries, he ran through with lots of attempts to get his tags daringly ripped off by 5 or 6 players. Eventually he scored a try. A good one too! After a few more tries had been scored from our team, we ended with a brilliant score which was 8-4 to Newport Junior School! We all played brilliantly well. Now, because of that we got a place in the semi-finals. We all felt sensational!

Then we got o the semi-final. Newport vs Redhill. We won 5-1. With an amazing left wing consisting of Leo and Fergus. Between them they scored three tries. Fergus scored a sublime try against Redhill’s amazing number 10. One of the tries, Liam took the throw in. Passed it to Kieran, who went around him and got the ball back. He whipped it to Fergus. Fergus ran forward into their players and popped it to Leo. With all of Leo’s pace, he sprinted down the wing leaving all the Redhill players behind him eating his dust. Redhill came forward and Liam shepherded him out to the side line. Liam threw it to Holly shimmied threw them all and placed the rugby ball on the floor. The whistle blew for the end of the match and everyone cheered. YES! The final was beckoning. Old park waiting for us. We we’re ready.

No one believed we could win because we were against Old Park who had beaten us twice in previous tournaments we’ve played. After that, a few players believed and tried to make other people believe and it worked! Everyone was dreading for the match to begin. The whistle blew. Old Park had kick off. They went on a very good attack, but the amazing NJS defence stopped Old Park from getting through. After a quick charge from Leo he managed to pressure the Old Park player and he tripped so it was a Newport ball. Newport took it early and Jackson got the ball and did a few drop the shoulders which put of the Old Park defence he made it all the way and made it one nil to

Newport. Next the super Newport made it 2-0 to Newport. Then the speedy Old Park player made it two one. But Newport managed to keep the slender lead against Old Park. In the end Newport won the tough final ten to six. Both teams were drawing crowds of students, who were eager to watch the fast, attractive Rugby on display. It was very end to end full on attacking game.

NJS managed to get to the Shropshire games finals. 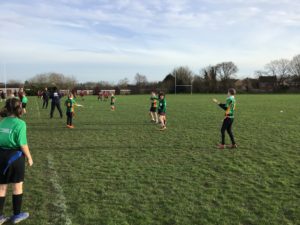 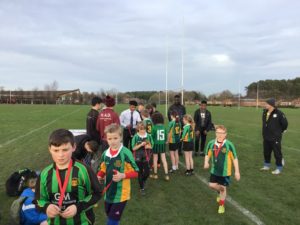 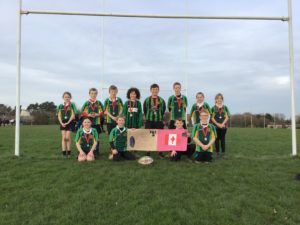 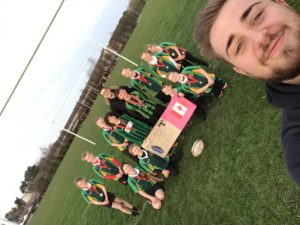