Year 6 created this to cheer up the Newport Vaccination Centre 😁 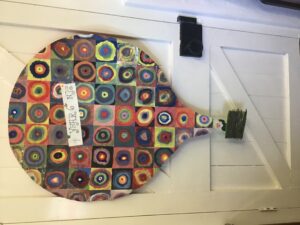 For all parents and carers

We have noticed that some children are finding it tricky to adapt back into school life. The impact of lockdown is both physically and emotionally challenging.

Some children are finding that they have forgotten lesson information and by making mistakes they become upset and aren’t seeing this as part of the learning journey.

We are completing tasks in school to support building resilience but here you will find some top tips for you to support children at home. We hope children discuss their day and they will share with you that they are finding re-establishing routines a little uneasy.

Thank you for your continued support!

Hello everyone! The whole Year 6 team are very excited to have everyone back: you have been missed!

Please do not bring any pencil cases in children will be provided with writing equipment and other equipment to support lessons.

Please bring a named water bottle so the children can be kept hydrated. Water bottles must go home daily to be thoroughly washed.

P.E kits to be brought into school on a Monday and will go home on Friday to be washed, ready for a a new week. We want to ensure that we can access P.E kits across the week as exercise is a very important part of our curriculum.

Enjoy the rest of your weekend and we will see you soon!
Year 6 team x

We are really looking forward to having you all back in school on Monday. Have a relaxing weekend!
Year 6 Team x

It’s book character day and I can’t wait to see your costumes online! Please send pictures of your costumes to NJS.Year6@taw.org.uk.

Have you been thinking about your book character costume for Thursday?

Have a good day! We hope you are looking forward to Book Week!

Have a good day!

My apologies I have just realised that I didn’t add the reading titles and captions that match the images.

Image with boy in bed and 2 bright lights:
Title – Archie Smith, Boy Wonder. Caption – A tiny voice asked, “Is he the one?”

Man holding chair above his head:
Title – Under the Rug. Caption: Two weeks passed and it happened again.

Two children by water:
Title – A Strange Day in July. Caption – He threw with all his might, but the third stone came skipping back.

Ship crashing into buildings:
Title – Missing in Venice. Caption – Even with her mighty engines in reverse, the ocean liner was pulled further and further into the canal.

Children sitting on a kart with sails:
Title – Another Place, Another Time. Caption – If there was an answer, he’d find it there!

Basement with very small door:
Title – Uninvited Guests. Caption – His heart was pounding. He was sure he had seen the doorknob turn.

River scene with harp at front of image:
Title – The Harp. Caption – So it’s true he thought, it’s really true.

Child sleeping and book grows plants:
Title – Mr Linden’s Library. Caption – He had warned her about the book. Now it was too late.

Floating chair with nun:
Title – The Seven Chairs. Caption – The fifth one ended up in France.

Bird wallpaper:
Title – The Third Floor Bedroom. Caption – It all began when someone left the window open.

Bright pumpkin:
Title – Just Dessert. Caption – She lowered the knife and it grew even brighter.

Man and child standing by railings at waterside
Title – Captain Tory. Caption – He swung his lantern three times and slowly the schooner appeared.

Child holding stuff in hands
Title – Oscar and Alphonse. Caption – She knew it was time to send them back. The caterpillars softly wiggled in her hand, spelling out “goodbye”.

House blasting off
Title – The House on Maple Street. Caption – It was the perfect lift off.